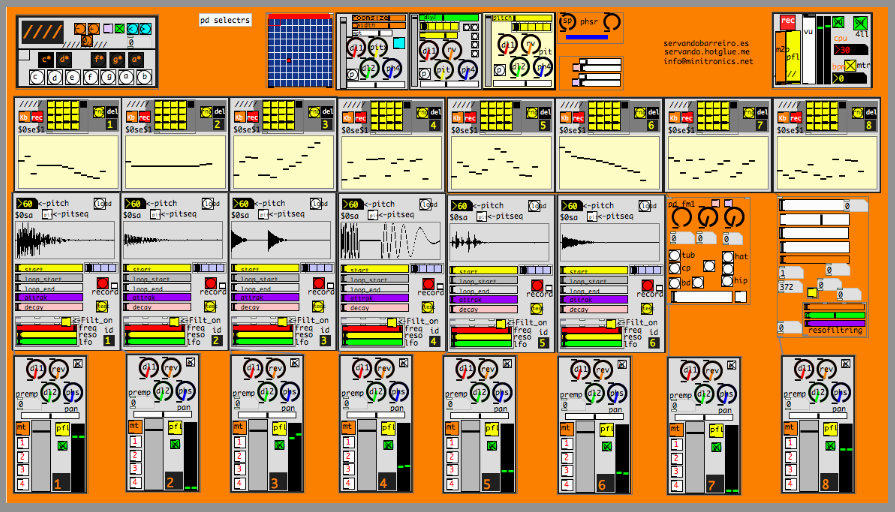 Welcome to Serquencer!, a modular, expandable, free & opensource sequencer / tool / environment made in puredata that requires no-knowledge about graphical programming to make music with it. It's also a great starting point for those who want to start doing audio with puredata.

Serquencer is the product of many hours of tests, two winters in Berlin, writing dozens of patches that were left behind, the reading & understanding of hundreds of other patches from the community, my deep admiration and curiosity for music technology, specially hardware sequencers / synths but also music software, specially those with emphasis in "realtime" creation and oriented to performance, most of all puredata itself, because of it's infinite depth, flexibility, openess, portability, philosophy, community and history too...
It is definitely not the first neither the unique "environment" done in Pd (check "rradical" "pdmtl" "netpd" "diy" "hackthedj" "pdlive", etc...) It's just my particular "compilation" of things. With the simplicity, usability, stability and fun in mind. more good news? you can incorporate anything from the above mentioned in this environment in minutes (if you know a bit about pd...)

Before you can start playing with it, unless you got a ready made application you must download pd-extended from this site: https://puredata.info/downloads/pd-extended Be sure you download pd-extended, not just plain "pd". Also if you have a mac and is newer than seven years, you need the Intel version and not the powerpc. once you download "pd-extended", just put it into your applications / programs folder and then Serquencer will work when you 2click in the file _serquencer.pd

_Overview:
Serquencer has a modular audio mixer that can have as many channels as you need. There is a master section where you can control the global volume, the global bpm and also record audio to harddisk (by default, the mix of all the channels and the effects) in .wav .
The sequencer modules also can be replicated many times. they have two types of sequencer, one 16 step standard rhythm sequencer and a "table" sequencer that can sequence pitches and that allows to randomize pattern or even " hand-drawn" the sequence. this table can be easily scaled to any length..

The Sampler module allows you to either record external audio or use any samples in .wav in order to be sequenced/ manipulated.
There are effects (two delays, reverb, phaser and pitch-shift) that are automatically connected to the aux sends in the mixer in a similar way that they use to be in a real world mixer.
The mixer also includes bus sendings which allows for experimental & flexible routings.

[s3ch 1]
this is one modular audio channel. there are four color-coded aux sends , a mono/stereo selector (clicked to mono by default) a "preamp" numberbox that allows to get more volume (use carefully...), a panorama fader, a "mute" button, the bus sends (1-4) a Standard Level fader, dual VUmeter (deactivated by default) and a PFL toggle, mostly usable if you have a multichannel soundcard and you want to pre-listen things when the level fader is all the way down, like in a real mixer...
there is also an id indicator (in this case showing "6") which will allow for automatic midi mapping and in this case, the first 8 channels "mute" buttons are mapped to the keys 1 to 8 of the keyboard.
you can use this feature to "structure" a track by muting and releasing different tracks / sequences like it is done in hardware sequencers such us Kawai q-80, akai MPC, Elektron Machinedrum... etc.


[s3sq 1]
[Kb] button "arms" the sequencer so you can play notes in that channel without recording them. [rec] button will immediately record notes to that channel, no matter in which position of the bar you are. The recording is recursive so, you will replace notes by playing different ones once a bar has been recorded. Note that you must "declick" [rec] when you are done & happy with the sequence and [kb] optionally when you don't want to hear "extra" notes each time you press the keys in your keyboard. The yellow toggles grid is a "Classic" 16 step sequencer (inspired by nanoloop tracker) that trigs a fix tone to the sampler. It's useful and simple for percussive parts. the [rnd] button will randomize notes in the table. There is a trick inside the sequencer that will create "blank" spaces in the outcome of the sequencer in order to make it useful for percussive sequencing. [del]= delete notes in the table. for the smaller sequencer, click the small black thingy. The sequencer must be created (just in case you create a new one) with the argument of the id number, if there are more than 2 module with the same id or without id number, there could be a conflict between them.


[s3s4 1]
the sampler module allows for loading .wav files in it to be sequenced by the sequencer that has the same id than the sampler (in this case "6". / basic users don't need to worry about this!). The pitch number allows for pitch shifting the sample, being 60 the default pitch. this thing works in semitones so 72 pitch is exactly one octave up (12 semitones). [pit] button allows for pitch sequencing from the table sequencer (the other seq just outputs a central pitch = 60) .
[load] will open a dialog to load a sample into the sampler. that [$0sa] thing is a "table" what means that the sample it's being loaded into ram memory. Once a Sample is loaded, you should see the waveform there. For the adventurous: .. It is possible to hand drawn the sample.. (or just f*ck a loaded one) The parameters of the Sampler are quite straight to understand. Start point, loop start, loop end, attack and decay . The red button will record whatever comes in the "inputs" of your soundcard. By defaults nowadays is the computer microphone. The "jamaican" object is a resonant lowpass filter with LFO. Click in the yellow box to activate. and follow your instincts/ears..


This are the effects. they are connected to the aux sends. first is delay 1 , which has a nice 2d controller. x axis is time and y controls the feedback. be careful. 100% into the Y axis means 100% feedback. >>>0_o<<<<
second box is a reverb. grey fader is the volume, white fader at bottom is panorama, the knobs are aux sends!, except that I avoided to send signal to itself, for obvious reasons BUT still it is possible to make a big mess if you send big amount of signal reciprocally between two effects.
3rd box with the green fader on top is a standard delay which can be synched to the main bpm by clicking in the white bangs to the right. the yellow "radio" on top, will allow in the two last positions for a experimental mode in which the delay time it's changing following a sequence that can be varied by opening the master section and re-drawing that tables i and J
fourth box is a pitchshift which I decided to connect through bus 1 (pre-f) in order to process all the signal. Again the upper yellow radio thingy will produce weird martian results.
fourth box on top is a "phaser", it takes signal from bus 4. Speed can be changed and I don't remember right now what the other knob does.. ; )
Box underneath are the LFO's 1& 2. speed can be changed and the toggles/buttons just allow to visualize the swinging.. (not recommended to keep clicked in old machines).


In the Master section, you can control the global volume , keep an eye to the cpu consumption , regulate bpm, control pfl level and record the audio in realtime by clicking [rec] and then giving a name to the soundfile. Recording stops when you press [rec] again (it turns green during recording). If you forgot to stop the recording, consider the file gone....
for "advanced users" : Inside master section, there are some OSC objects that will allow to send/receive sync to other computers running serquencer, which allows for collaborative or multi-computer performance.. Audio latency should be the same in all the machines. Sloppy wifi will lead into occasional glitchy moments. Ethernet cable will provide unrivaled synchrony..


This thing is just a computer keyboard to scaled midi notes converter.. Letters a to k (no caps!!!!) are notes from c to b. z and x letters in your keyboard will shift octave up and down. the violet box together with the blue buttons pretended to be a "non realtime note sender" actually not in use.. Actually. by default, there is nothing to click there...


Fm percussive synth. Click any of the buttons, open a bit the white fader , tweak... that's it. note: this is a subpatch, not an abstraction so, you would not be able to create it by "calling" it unless you convert it in an abstraction yourself.. (copypaste possible & encouraged though..) here an example: https://www.youtube.com/watch?v=LYiV_RS1QXA&list=UUN9YnkC-wEXLqlDdna-smww

Bass synth. Yeah... tweak & learn. From 303 moments to pink floyd sequences. here an example: https://www.youtube.com/watch?v=B0TTgB1zRnw&list=UUN9YnkC-wEXLqlDdna-smww&index=8 ah!. copypaste works here, no worries about id (except for it's respective sequencers). This thing (like any other synth/sampler/instrument), expects input from a sequencer and gives audio output to an audio channel . OF course you could drive several of this from a single sequence, in order to create an awesome new multi-oscillator synth...